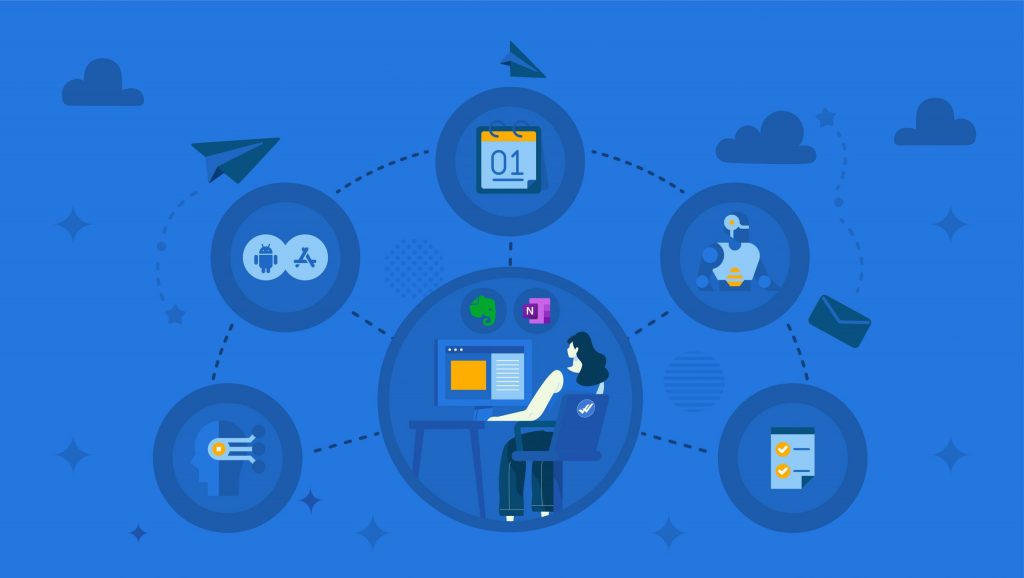 An ecosystem refers to the environment of software, hardware, services, community, and tools that make your Personal Productivity. Platform more effective.  In the following sections, we take an in-depth look at the ecosystems of Evernote and OneNote and how they can help improve your effectiveness.

To get the most out of a PPP, you must consider the community that supports it. How will you learn more and build your skills?  Who is pushing for improvements or developing add-ons?  As these questions suggest, the breadth and depth of a PPPs community indicates its longevity and the value you can receive from joining.  Ideally, your perfect Personal Productivity Platform thrives in a robust ecosystem and has a healthy community behind it. Let us look at the ecosystem and the community behind Evernote and OneNote.

Being the standalone player in our comparison, Evernote has always thrived on partnerships and integrations.  Some years back, Evernote moved to storing notes in Google’s cloud which signaled its staying power as a service.  This partnership supported its native integration of Google Drive documents and use of Google's natural language processing to support voice recording and annotation.

Apart from Google, Evernote has partnered with other big brands to expand Evernote’s usefulness in our lives. Fujitsu enables users to scan documents directly to Evernote in one-click through their ScanSnap scanners. Sony recently launched an e-reader that comes with Evernote pre-installed. In addition to its many direct partnerships, Evernote developed the Evernote App Center to showcase many apps and services built around it.

Evernote also prides itself on a robust community of users, consultants and community ambassadors. They have Evernote-Certified Consultants and Community leaders around the world running live events or just helping out users. Speaking of help, Evernote’s Forum is a throwback to the past, but can still be very useful in answering questions or just discovering a use case you hadn’t explored.

As part of a much larger company, OneNote has the benefits and burdens of its connection to Microsoft. On the benefits side, Microsoft provides a ready-made ecosystem of products and services to connect with. There is a large community of users that integrate OneNote into their Microsoft-based universe and the Microsoft universe isn’t going anywhere. As part of the Microsoft family, OneNote is able to incorporate features from Microsoft's other software directly into OneNote (e.g. handwriting recognition, note-formatting, math calculations).

On the burdens side, OneNote is not the sole focus of the company, so it can get lost among Microsoft’s other apps. There aren’t any dedicated partnerships, OneNote community leaders, OneNote-dedicated forums, etc.  OneNote (and Microsoft in general) were late to realize the importance of integrations, although they embrace them fully now (unlike Apple for example).

OneNote has the more robust ecosystem of integrated products and services, but for a PPP, Evernote wins this section. Productivity software is not just about software. It’s also about our psychology, our habits, about the myriad ways we decide what to do and then execute on it.

Evernote’s push into the non-digital human world is what separates it here. Evernote prioritized community experts, forums, partnerships with scanners, e-readers and others you’ll see below in integrations. Remember, a PPP will touch every important area of your life and Evernote’s efforts in the non-digital world make this easier and more powerful.

Before we dive deeper into more sophisticated integrations, let’s celebrate email. Love it or hate it, email is often the method by which we receive or send much of the information that crosses our paths each day. For example, travel bookings, receipts, project details or family photos are just a few of items that regularly reach our inbox. Thankfully, both Evernote and OneNote make it easy to capture this information flow into our preferred PPP for processing later.  Capturing, organizing and prioritizing this information flow can be a job unto itself and our PPP’s can make it so much easier.

In Evernote, sending an email to the unique Evernote email address found in your account settings creates a new note.  The email subject becomes the note title and the body becomes the notes content.  This simple "integration" is really helpful, but it’s just the beginning.  Adding the following special characters to the subject of the email gives even more capabilities.

Evernote even allows you to add text to an already existing note via email. Send an email with a subject line similar to the note’s title, add the plus (+) symbol at the end, then enter the text you want to add to the note as the email body. Evernote will append the text in your email body to the note you specified in the subject.

You can also further automate the way Evernote stores your emailed notes by activating its smart filing feature in your account settings. Similar to the technology used with its Web Clipper, Evernote will automatically determine the notebook and tags for a note based on similar notes in your account..

Just like Evernote, OneNote enables users to save notes to their OneNote notebooks by sending them via email to [email protected]. However, for Microsoft to know which OneNote account to place these emails, you’ll first have to register your email address. Using this single email address can be quite limiting if you have multiple email accounts or you want other people/apps to add notes to your account.

If you are using Outlook mail, you can save an email to OneNote without sending it as an email by selecting “save to OneNote from the drop-down menu under “more actions” in Outlook. Unfortunately, you have to manually choose the path where you want to save each email which can prove to be cumbersome if you'd rather save several emails at once.

This section’s winner is Evernote. They have clearly thought through several scenarios where integrating with email could aid productivity. Like their Web Clipper, Evernote’s focus on flexible methods of capturing and organizing information is apparent.

Because Evernote allows you to use any email provider, you can easily use filters and forwarding to further automate creating notes. You can also use 3rd party integrations like TaskClone to do the same. It’s little efficiencies like these that add up to greater overall productivity.

Add-ons and Integrations connect to your PPP to make it more efficient and effective. Some can be general productivity boosters while others are designed for a particular use cases or short-comings of the underlying platform. PPPs intentionally serve broad purposes, so understanding complementary software and services can be crucial to targeted uses and overall productivity.

There are certainly more integrations than we can cover here, but we touch on a few unique ones for each platform and then a few that work well on both Evernote and OneNote.

PomoDone connects to your Evernote account and can track how much time you spend on a specific to-do list task in Evernote. If you use the Pomodoro technique to keep you on track and motivated, this could be very handy.

Stocks Live is an iOS app for stock investors that connects directly to Evernote to allow you to capture news reports, economic data, stock research, audio notes, charts and more.

DocuSign’s iOS app allows you to load documents from Evernote, get them signed and then reload the signed document back into Evernote. If your business involves getting signatures on important documents, this is another way you can deepen your use of Evernote.

Blinkist is a service that summarizes popular non-fiction books into short, readable sections called “Blinks”. Blinkist can send any Blinks you like directly to Evernote where they become part of your searchable, taggable, linkable knowledgebase.

Got paper? Send this Shoeboxed your important papers and they’ll scan them and directly import them into your Evernote account.

Onetastic is an add-on app that allows users to perform limitless customizations to their desktop OneNote app through the use of macros. From adding more fonts to embedding calendars, there are dozens of pre-built macros and you can create your own. Using macros may seem like a throwback to a desktop-centric era, but If you like personalizing your PPP, Onetastic is the only game in town.

With TaskClone, you can send individual checklist items, note titles, events written in natural language and Evernote Reminders. It’s a background service, so there is no app to download and it works on every OneNote or Evernote platform (e.g. Apple Watch too). It sends to 40+ apps including Todoist, Google Calendar, Outlook, OmniFocus and Trello.

Zapier is an automation platform that helps you integrate to over 2000 apps, including OneNote and Evernote. With just a few clicks, Zapier can automate saving information in your PPP from most of the apps it supports. Zapier focuses on business apps with nearly endless use cases from project management to marketing.

IFTTT stands for If This Then That, with ‘this’ being the trigger and ‘that’ being the action. IFTTT is an automation platform similar to Zapier above but focused on personal services more than business services. You can connect your Fitbit results, Google Assistant and even your Smart Thermostat. If you’re into tracking your performance, you can automate getting all kinds of data into your PPP.

Feedly acts as a central access point to all your favorite blogs, websites, and youtube channels based on the preferences you set. You can then automate sending those articles to your PPP in a reader-friendly format to consume at your pleasure.

Evernote is the winner here for the reasons you’d suspect. As a standalone product, Evernote sought integrations as a way to compete from its inception. They have a broader set of partners and integrations,and they built an API for developers to use long before OneNote did. That said, Microsoft is both developing its own deep integrations across its ecosystem and recently growing the list of 3rd-party integrations.

Evernote understood the importance of third-party integrations, almost from its inception. Their API (Application Programming Interface) used by developers was the same used internally.  As a result, it provides fine-grain access to details within a user’s account which makes integrations more robust. Early on they built development kits to support developers and hosted hackathons / competitions dedicated to supporting 3rd-party developers.

Like many things with Evernote, recent times saw Evernote focusing on their core app to the detriment of the developer program. Now that they’ve released their new editors, we’re hopeful Evernote will again prioritize their underlying code and 3rd-party developers interacting with it.

OneNote came late to the developer program party, but they are trying to make up for lost time.  OneNote didn’t even have an API until 2014. With each iteration, their API provides more functionality. Building on Microsoft’s ecosystem, there are many developer tools and examples. However, developer support is similar to product support in that it seems OneNote sometimes gets lost among Microsoft's many products.

This section is a tie with each having different strengths.  Evernote continues to benefit from a long head start, relative stability and deep integration with its core service. OneNote benefits from Microsoft’s continuously updating tools, strong documentation and simply greater resources.  Both services make it easy to get information in, but we’ll be watching how they help developers get information out. 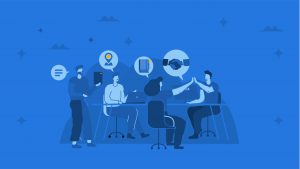 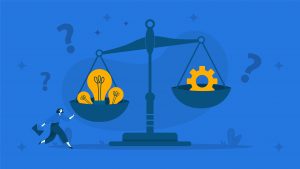 Let us know if something is missing in our comparison or something has changed.  We're committed to having the most comprehensive and updated comparison around.  Let us know